There was a time when the thought of a video game-inspired film or television adaptation was met with much skepticism. After years of failing to properly capture the heart of a franchise, we finally saw a major breakthrough with 2019’s Netflix adaptation of The Witcher. No longer do the vast, open worlds of electronic RPG’s need to fit into a succinct 120 minutes, nor do they require a studio commitment of upwards of 22 network television episodes (chunked up into 20 or 40 minutes of content to allow for mid-episode advertisements). The freedom of streaming has finally allowed for a somewhat faithful and largely entertaining video game adaptation.

Nowadays, the announcement that one of our favorite video game franchises will be given the streaming series treatment can be met with much excitement, anticipation, and hopefulness, as was the case when I caught a tweet from Bethesda teasing a partnership with Amazon Video regarding a Fallout adaptation.

The world of #Fallout is headed your way in a new series in partnership with @AmazonStudios and #KilterFilms. https://t.co/zk9s2qDN1m pic.twitter.com/r5KZHvRM1s

At first blush, the vast, weird, steampunk-ish yet apocalyptic survivalist world of Fallout seems ripe for exploration. It’s got a little bit of everything: survival, conspiracies, zombie/mutant creatures, 50’s Americana, synthetic android humans, and political strife. Since Bethesda took over the IP in 2007, the Fallout lore has expanded tremendously over the course of three, arguably four single-player RPG’s.

One of the things that has me excited about a Fallout series is the prospect of meeting some brand new characters while potentially running into some existing favorites. In the Fallout series, players create their own characters to play through the content, unlike the Witcher series where everybody plays as Geralt of Rivia. This allows the writers a lot of freedom to come up with some vault dweller characters to follow through the series. The fact that the series is being produced by the same company that brought us Westworld is also cause for optimism for some. 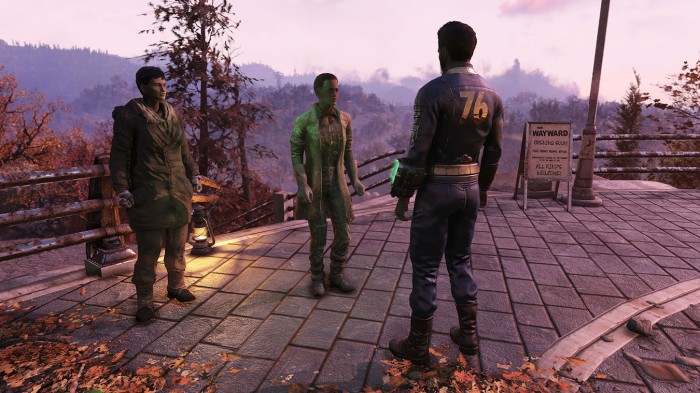 Personally, I would love it if we were introduced to multiple dwellers from different vaults just prior to the character escaping/leaving the vault. The first episode of the series could chronicle the vault life of three or four different sets of vault dwellers. Viewers could be treated to three or four very different types of Vault-Tec vaults, yet not understand why such stark differences exist. The first episode would conclude with each set of vault dwellers exiting (or escaping) to the outside world for the first time, or for the first time in a long time. Subsequent episodes in the first season would follow the vault dwellers as they discover various aspects of the wasteland: ferals, small settlements, mutants, deathclaws, and flashes of Brotherhood of Steel vertibird flyovers. Don’t introduce the Brotherhood of Steel yet, though. Allow them to appear periodically at a distance as some kind of mysterious force, possibly good, possibly oppressive.

Entire episodes could be dedicated to a single set of vault dwellers. Viewers could be treated to Lost-like flashbacks of either vault or pre-vault life (depending on the timeframe of the show) to fill out character backstories. At some point, one of the vault dwellers meets up with a synth. The interplay between the vault dweller and the synth introduces the audience to some of the mysterious aspects of the Institute. As the episodes progress, each set of dwellers would hear rumors of a huge city (like Diamond City in Fallout 4). This city affords opportunity and protection and becomes the destination goal of each set of vault dwellers. The first season ends when all of the vault dwellers we’ve been following reach the massive settlement.

Now that the world and our characters have been established, season two would consist of all of our vault dwellers meeting one another, possibly in a refugee camp or a street market. We learn a little bit about the settlement, maybe there’s a corrupt leader, some organized crime, things that make our characters start to realize it’s not the panacea of protection they’d hoped for. recruitment posters for the Brotherhood of Steel are posted here and there throughout the town. At some point, the city is attacked by synths, and the BoS vertibirds show up in a nick of time to fend off the assault. Our vault dwellers are taken in by the BoS who reveal more about (their perspective) of the Institute.

Horrified by the synth assault and what they learn about the Institute, the vault dwellers volunteer to help the BoS (one of them enlisting outright) strike back at the Institute, perhaps through an infiltration/espionage mission. Throughout the mission, our main characters are exposed to the Institute’s ideology, which muddies the waters of who is right and who is wrong. Allegiances and friendships are tested. The climax of the season sees the BoS using the information gathered by our espionage agents to attack the Institute head-on, causing many casualties (including our vault dweller who enlisted) and scattering the Institute survivors into the wasteland. Our remaining vault dwellers question whether they’ve made the right decision to align with the BoS, and the end of season 2 concludes with them heading back out into the wasteland on their own.

Our vault dwellers happen upon an unopened vault and are able to trigger the door mechanism. Inside, they discover rows of cryogenically frozen vault dwellers, of which only one or two are still alive. They are able to un-freeze these survivors (to replace our deceased character from season 2) and uncover a treasure trove of Vault-Tec data within the still active computers in the vault. Along with their own vault experiences, they are now able to figure out that Vault-Tec has been performing horrifying physical and psychological experiments in each and every vault (with some as control groups) since the fallout began. They also discover some vague information indicating that Vault-Tec may still be active, pulling the strings behind a massive social experiment between warring factions like the BoS and the Institute.

Infuriated, the vault dwellers decide to use the information they’ve found to take down Vault-Tec once and for all, provided they can find them. The season consists of our heroes trying to find where and how to strike in order to dismantle this mysterious corporation. It culminates with a major victory over a high-priority target, but also some doubt as to whether Vault-Tec has really been defeated, or simply alerted to the new danger of the vault dwellers.

Subsequent seasons, if they are deemed necessary or desirable, can deal with other factions, the war for resources, helping settlements, and various wasteland challenges. At some point, one of our vault dwellers (probably in season one) should find a suit of power armor and briefly don it before running out of power. We should also throw in some fan service in the form of popular characters from the franchise like Nick Valentine or Paladin Danse.

I think if Amazon were able to follow the framework presented above, we’d have a nice, solid, three-act series depicting the Fallout world. Of course, I’m not a screenwriter, so I’m also anxious to see what the professionals come up with!