I’m not really a big spender. Having five people dependent on my financial income has required that I be fairly judicious with my expense budget, especially with regards to non-essentials. But there are several things that can enhance my willingness to trade my money for pixels. One such thing is goodwill towards the company, itself, which I feel is fairly undervalued in the industry. While some folks are only concerned about the game and the enjoyment they receive while playing, I’ve reached a point in my life where I want to feel valued as a customer. I want the company to acknowledge that I have chosen to enter into a relationship with their product, and that I can also choose to sever it if things don’t go well.

This past weekend, Gazillion’s Marvel Heroes gave away a “baby potted Groot” pet as a part of their two year anniversary celebration. When I told my eight year old son about the promotion, he was very excited to log in and claim the prize. He thinks cutesy little things like that are hilarious, and I’ll admit I was anxious to slot the pet as well! He logged in and opened his present. I showed him how to place it in the pet slot of the character screen. Then I walked away to do some odd fatherly thing or another, and when I returned about five minutes later, he was playing Minecraft, instead.

“I thought you were playing with baby Groot!” I said. At this point his face fell and he gave me a sad, sideways look. “I didn’t mean to do it.” He replied back to me with his mouth slightly downturned. “Do what?” I asked. I thought maybe he had quit the game by accident, but he knows how to start it back up so that couldn’t have been the problem. After much back and forth, I finally pieced together what had happened. After I left, he decided to un-slot the baby Groot pet, but instead of just right-clicking the icon to disable it, he dragged it off the character screen and into the game world, which, of course, destroys the item. “Didn’t it prompt you before it destroyed it?” I asked, knowing how the game usually checks to make sure you want to get rid of items of value. “I didn’t read it.”

Of course not, he’s eight. At his age, reading two lines of in-game dialog is akin to reading a “terms of service” agreement to the rest of us.

Entering into my “fix it, dad!” mode, I decided to go ahead and contact Gazillion on the off chance that they could restore the item on his account. The online ticketing system for Marvel Heroes is horrendous. It appears to be run by a separate entity (which isn’t unusual) with very little of the flash and functionality reserved for the “sales” portion of the website (which also isn’t unusual). I filled out a ticket in my son’s name, and received a hyperlinked ticket number on the confirmation screen. Being an IT professional, I’ve dealt with too many ticketing systems to walk away at this point. It’s always been my practice to follow up on the ticket right away and make sure that it actually made it into the system. When I clicked on the ticket number, I was prompted for a username and password (I was already logged into the main Marvel Heroes site). I re-entered those credentials on the possibility that re-authentication was required, but was still not allowed to see my ticket. I know that some support sites require a separate ID and password from the main site, but there was no place on the page to create a new account. I also had not yet received a confirmation e-mail for the ticket, so the only indication I had that a ticket was even submitted was the confirmation web page, which could have been coded by a 4th grader taking an “intro to HTML” class.

At this point, I decided to throw a hail-mary pass and reach out to the Marvel Heroes twitter account. I still had the ticket number so I included it as a preemptive strike. To my relief, within a few minutes they, an account with 42,000 followers, replied that they had received the ticket and that a confirmation e-mail was on its way. I might also add that this is not the first time that @MarvelHeroes has responded directly to a question I tweeted about the game. 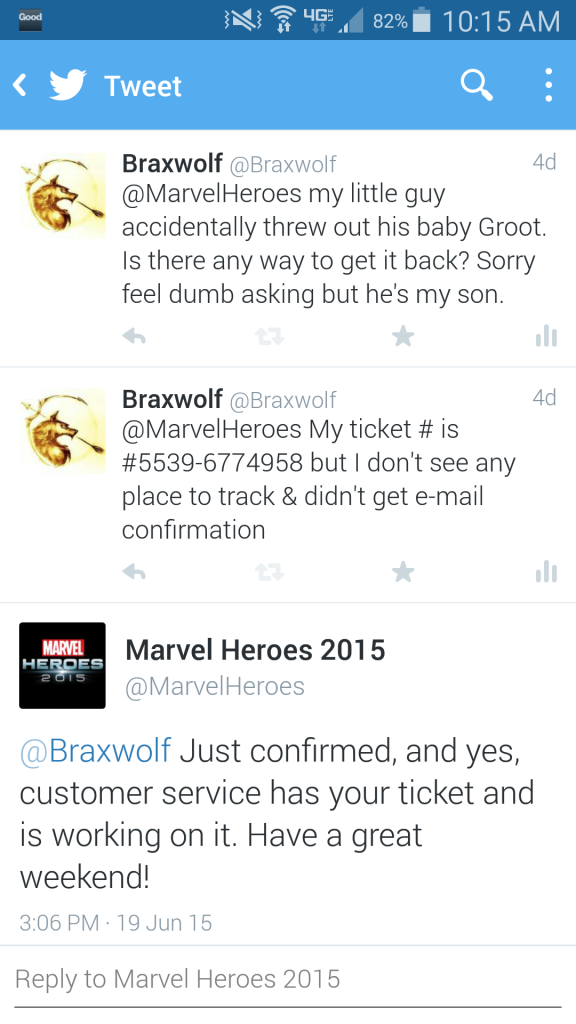 Whatever the ticketing system lacked was made up for by the responsiveness of Marvel Heroes’ social media gurus. The e-mail itself stated that MH has a one-time accommodation policy, which simply means if you do something stupid they’ll fix it once, but never again. They require you to confirm that you want to use your “one strike” on the ticket you’ve just opened. This policy is probably usually cashed in by people who accidentally trash their uber chaotic primo mega gear, but in our case baby Groot is probably the most important item we’ll ever need to recover. I cashed it in.

At the end of the day, my son had his Groot back, along with a stern reminder to read everything before he clicks “ok”. What I received was reinforcement that Gazillion values us, knows that we are people who sometimes make mistakes, and goes out of their way to help us out when we’re stuck. They also enabled me to look like a hero in my son’s eyes for a few minutes, which was worth even more.

The next day, I spent another $30 on the game, and felt great about it.

9 thoughts on “In Gaming, A Little Goodwill Goes a Long Way”