A few weeks ago, I put the call out for people to respond to a “gamer survey”. It was kind of done on a whim, and the purpose was to either challenge or verify assumptions I’ve been making when mulling over some of the issues associated with gaming. For example, one assumption that I’ve been running with for a long time is that video consumption mostly occurs within a younger demographic of gamer. This assumption is based on a very small sample of my friends who are gamers and my own family, but I realize that extrapolating my own experiences and applying them to the entire population of gamers can be a big mistake, and is by definition stereotyping. So, I decided to go ahead and take a survey of gamers to see what players of different demographic segments enjoy, and what motivates them to play at all.

This post will show the overall summary results of the survey. I’ll be following up at a later time once I’m able to slice up the data and provide some more detailed information on things that I find interesting.

A couple of things before we get into the results. First of all, I had 75 respondents, so not an enormous number, but a number of some significance. Certainly enough to see some small trends. Secondly, all responses were anonymous, and the order of answers (check-boxes) were randomized for each respondent. Even so, I wouldn’t consider this a completely random survey due to the way it was distributed. I sent three requests for respondents out via Twitter, one via Facebook, one via Google+ and one via Anook. It was the best way I knew to get the survey in front of as many people as possible, but I submit that it may have reached only a certain segment of the gamer population due to distribution method. For example, while I do think that gaming on PC’s has seen a resurgence in recent years, I think that the number of respondents who answered “PC” as one of their gaming platforms is probably inflated because gamers who are sitting in front of a PC are more likely to respond to a web-based survey than those *not* sitting in front of a PC and instead playing on a console. So, take all results with the appropriately sized grain of salt.

I don’t think this section surprised me very much. While the perception of the gamer in society as a whole is the 15-25 year old boy living in a dark basement, most of us realize that the average gamer skews older and more mature/successful than is typically portrayed. Keep in mind, though, that many of the respondents are probably twitter followers of mine, and also LOTRO players, both of which would trend towards a slightly older demographic. 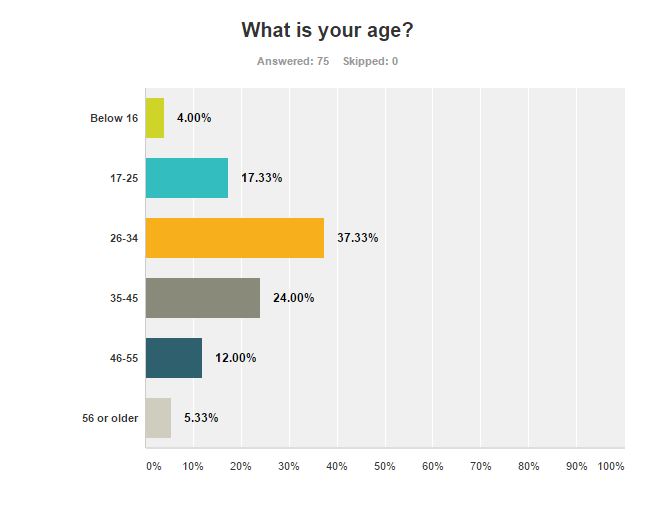 The fact that I had slightly more female responses than male did surprise me a little bit, though it’s probably close enough to be considered statistically insignificant. Still, the fact that this many females identify themselves as gamers shows just how far video games has come since I began playing. Also, I’m sure it says something about my inescapable survey-giving charm. Hello, ladies!

First, for those of you with obsessive issues (like me), I apologize for the way the following graphs are formatted. The tool I used does not appear to have a way to order the results so that the longest bar is at the top and the shortest is at the bottom. This section asked the respondents what they enjoyed about video games. There was no request to rank answers, nor was there a limit to the number they could choose. I simply wondered how people play. Several interesting results follow: 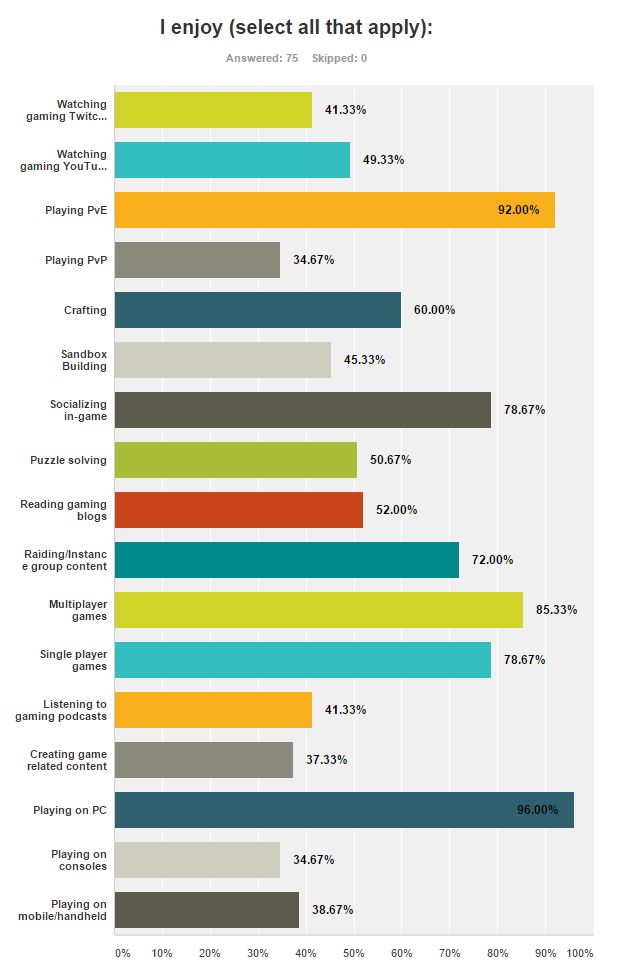 Some things to highlight on the graph: PvE seems to far outpace PvP as the play style of choice. Also, playing on a PC far exceeds those who responded that they play on console or handhelds, though mobile/handheld did inch out consoles as a platform of choice. A whopping 72% of respondents said that they enjoy raiding or instanced group content, much higher than some of the statistics named by Turbine in recent months. The social aspects of gaming also seems to be a very important to those who responded, as 78% reported socializing in-game as something they enjoy. As far as content consumption goes, gaming blogs came out on top with 52% responding that they read them, with YouTube video consumption just behind at 49%. An equal number of respondents view Twitch streams and listen to gaming podcasts (41%). Actual Data below: 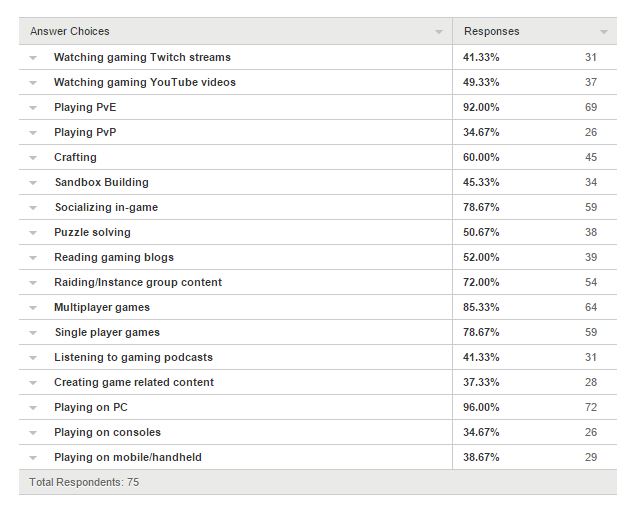 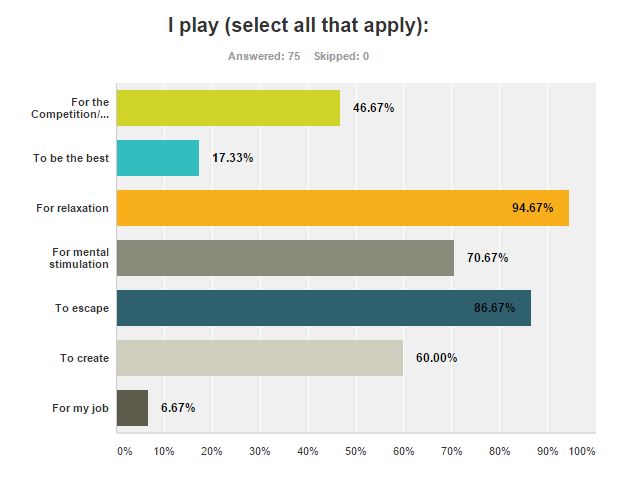 This data could probably be rationalized a million different ways, but I still find it interesting how people responded. For example, nearly half of respondents play for competition, but many don’t necessarily care about “being the best”. Nearly 87% of respondents said they play “to escape”, which is either not surprising at all or very alarming, depending on whether you see that as a good or bad thing. 60% are tapping into their instinctive desires to create, though only 45% responded earlier that they enjoy sandbox building games. Perhaps least surprising, in hindsight, is that over 94% responded that they play games to relax. Whether their method includes creation, mental stimulation, or competition, the theme of relaxation seems universal. I also had five people respond that they game for their job. So, thank you for your responses, gaming professionals!

I’ll be back with further breakdowns of the survey data in the future!